The skeleton consists of 206 bones, which are connected by joints. The skeleton protects the internal organs, provides a point of attachment for muscles and produces blood cells.

The human skeleton is divided into the axial and appendicular skeleton.

The axial skeleton is made up of the bones of the head, neck and trunk (including the vertebral column).

The former connects the upper limb to the trunk and it is composed ofthe shoulder girdle  the (clavicles and scapulae), while the latter is in fact the bony pelvis., The skeleton of the upper limbs consists of the (humerus, ulna, radius and hand bones,) while theand lower limbs consist of the (femur, tibia, fibula, foot bones).

Learn the bones of the body with skeletal system quizzes! 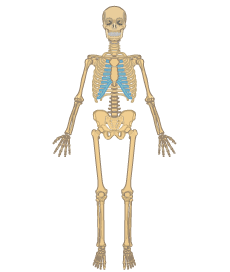 Introduction: The adult human skeleton is a framework of 206 bones […]

An illustrated tutorial covering the anatomy of the axial skeleton in an easy-to-digest and interactive way. Click and start learning now!